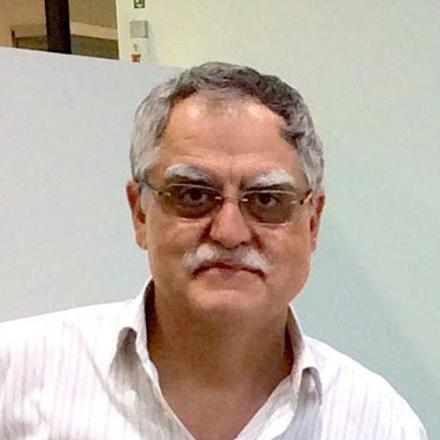 Javier Trujillo Bueno is an affiliate scientist at HAO/NCAR. He has a doctorate in Physics from the University of Göttingen (Germany) and is a Research Professor of the Spanish Higher Council for Scientific Research (CSIC), destined to the Instituto de Astrofísica de Canarias (IAC).

He has extensive experience in the field of solar physics, and specifically in solar magnetism, theoretical and observational spectropolarimetry, the quantum theory of spectral line polarization, radiative transfer in magnetized plasmas, and numerical simulations. For the last 25 years he has pursued the development and application of novel methods, based on optically-polarized atoms, for investigating the magnetism of the solar atmosphere. Since 2011 he is one of the Principal Investigators of CLASP (Chromospheric Lyman-Alpha SpectroPolarimeter), a series of space experiments using NASA sub-orbital rockets, motivated by the theoretical studies of Professor Trujillo Bueno and his international group. These, and other achievements, have served to make him the first Spanish scientist to obtain an European Research Council (ERC) Advanced Grant in the field of “Science of the Universe”.