The Solar Maximum Mission (SMM) observatory was launched by a Delta rocket on February 14, 1980, from Cape Canaveral, Florida, into a circular orbit (altitude: 574 km) inclined 28.5 degrees to the equator. The ~95 minute period of each SMM orbit was divided into roughly 60 minutes of satellite day and 35 minutes of satellite night. The photo at right shows the launch of SMM in 1980.

SMM's payload consisted of eight instruments that provided broad spectral coverage of radiation produced by solar flares. Among SMM's primary science objectives was the study of the dynamics of solar flares and the study of solar magnetic fields associated with the flare phenomenon. For a detailed description of the SMM coronagraph/polarimeter instrument and scientific objectives, see MacQueen et al. (1980).

The High Altitude Observatory provided a white-light coronagraph/polarimeter (C/P) to study the relationship of the corona to the flare process. This instrument obtained coronal images from March through September of 1980 before suffering an electronics failure that rendered it inoperative. A few weeks later, a power failure occurred in the Attitude Control System (ACS) of the SMM spacecraft; consequently, stable pointing of the spacecraft was no longer possible, and the entire spacecraft was put into a dormant ("standby") mode. The SMM spacecraft remained in this state for more than 3 years.

The Challenger Space Shuttle (STS-41C) was launched on 6 April 1984 to attempt an in-orbit repair of SMM.  Astronauts retrieved the Solar Maximum Mission (SMM) satellite from low Earth orbit and brought it into the shuttle bay where it was repaired by Mission Specialists George Nelson and James van Hoften. That mission was successful in replacing both the spacecraft Attitude Control System and the coronagraph's Main Electronics Box. Details of the retrieval, repair, and re-deployment of SMM by the shuttle crew have been documented by Woodgate and Maran (1987). A few images of the repair mission highlights are show below. 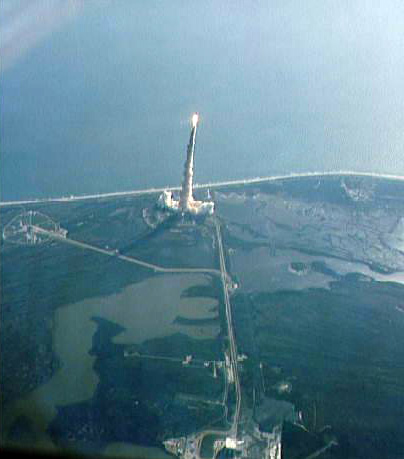 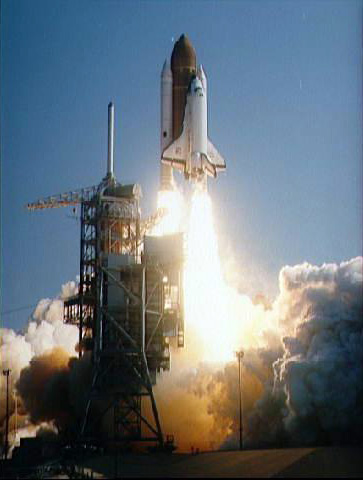 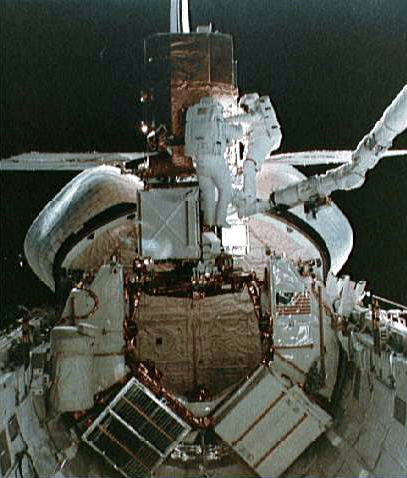 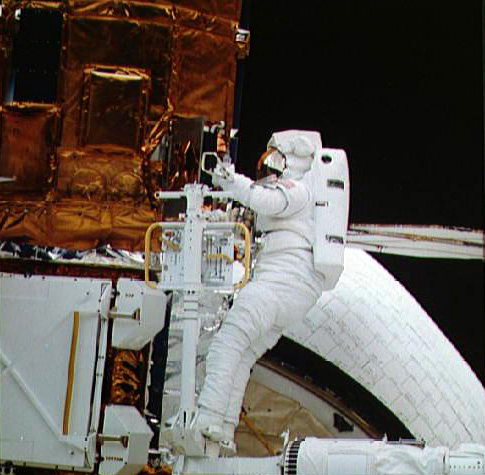 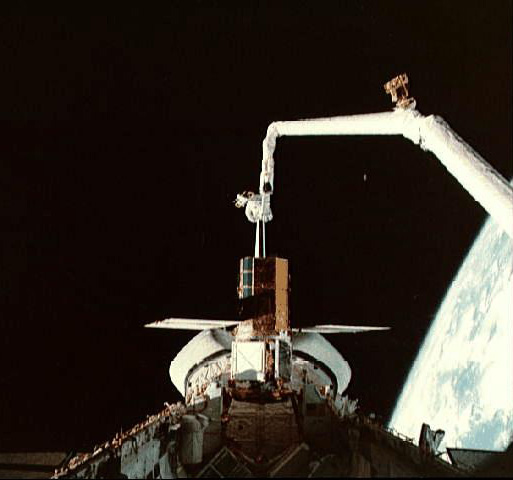 In June, 1984, the SMM coronagraph resumed operations, capturing images of the corona during the daylight portion of each orbit. Coronal observations were unavailable from 8-26 January 1986, due to the loss of memory in the on-board spacecraft computer. Furthermore, only a few coronal images were obtained between 26 January and 25 February 1986, due to special, off-pointed observations of Comet Halley.

Observations were again interrupted in December, 1986, when the coronagraph's dedicated tape recorder failed. Operation was restored in March, 1987, with the data henceforth stored on the spacecraft's single remaining tape recorder. This reconfiguration resulted in a degradation of the temporal resolution of the coronagraph (from 1.5 minutes between successive images before December, 1986, to eight minutes between images beginning in April, 1987). Thereafter, observations continued without any major interruptions until the end of the mission. Data gaps are noted in the SMM CME Catalog.

Halley’s Comet was the first to be observed by spacecraft. The various spacecraft observations provided the first data on the details of the comets nucleus and tail and together the data supported Fred Whipple’s idea of a comet as a ‘dirty snowball’. Halley’s Comet will return again to the inner solar system in July 2061.

Atmospheric friction slowly caused the altitude of the SMM spacecraft's orbit to decline. Consequently, the SMM satellite lost attitude control on November 17, 1989, when the spacecraft re-entered the Earth's atmosphere. Re-entry occurred at 10:26 UT on 2 December 1989 over the Indian Ocean (latitude 3.1 degrees North, longitude 88.6 degrees East). The coronagraph generated ~240,000 images of the solar corona before its fiery demise.

The use of SMM C/P images for public education efforts and non-commercial purposes is strongly encouraged and requires no expressed authorization. However, it is requested that any such use properly attributes the source of the images as: "Courtesy of HAO/SMM C/P project team & NASA. HAO is a division of the National Center for Atmospheric Research, which is supported by the National Science Foundation."